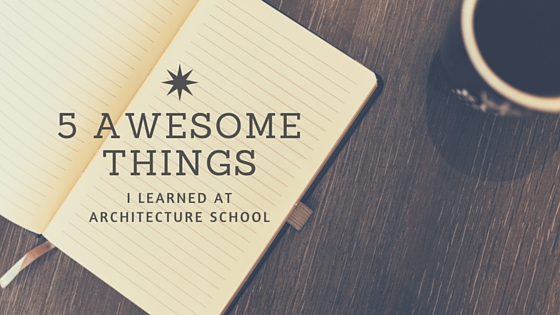 Ever since I can remember, I wanted to be an architect. As a teenager I spent hours designing houses, drawing plans on graph paper and dreaming about the practice I would have one day (I also thought I’d be married by the age of 25!).

There is something so magical about well-designed spaces – I’m talking the bones of a place here, not the dressing that comes afterwards – and I wanted to be a part of that. Unfortunately, life didn’t turn out that way but here are 5 really awesome things I learned while I was studying for my architecture degree.

My design tutor in third year was Bruce Rickard – a renowned architect from the Sydney School which was active in Sydney during the 70s and whose work is highly prized today. Every time we’d pin a plan to the wall, Bruce’s first question would be “where’s north?” and woe betide anyone who hadn’t put a northpoint on there.

Orientation is so important when it comes to design – it allows you to determine where the light (and warmth) is coming from so you can maximise its effects in your design. Ignoring the orientation of your block will result in a house that’s cold and dark – not what most of us are looking for.

Buildings are really about people

Sure, they’re made of concrete and bricks and glass but really, architecture and design is all about the people who will be using the building. This affects every aspect of the building – from the scale and size of rooms to the type of material it’s built in. Think about who and what you want your home designed for and let that end user influence your design decisions.

I was pretty good at maths and physics at school, but the amount of physics we did at uni really surprised me. It probably shouldn’t have but it did. Buildings need to be able to stay up and that requires structural elements that can take loads and wind shears and all those kinds of things that aren’t that sexy but are really, really important.

What does this mean to you? Well, you can’t necessarily just knock that wall out to create an open plan kitchen and living area because that wall might what’s holding the roof up. Builders are generally pretty good with structures but they will usually get a structural engineer involved early on to make sure the maths and physics side of things is all good to go.

Think about the trees

Buildings exist in the environment and if you’re building or renovating a house that means land that probably has a slope and existing trees and plants. Considering your site is crucial when you are designing as ideally you’d like to work with the site rather than against it. Don’t think of landscaping as something you tack on at the end if there’s any money leftover, instead consider it at the start of your project and allocate at least 10% of your budget to landscaping. The natural environment is an asset to be appreciated, not ignored.

Make it a bit magical

One of the highlights of architecture school for me was having a couple of lectures from architect Peter Stutchbury and visiting his studio on Sydney’s northern beaches. He spoke about a client who wanted him to design a “magic box” for her. I can’t recall the details of that particular design but I do remember that he spoke about the importance of including something a little surprising in design – perhaps a hidden reading nook or a tiny window that opens to reveal a little sliver of a special view. It doesn’t have to be big, but I love the idea of a little bit of magic in my home.

And the one big thing I didn’t learn?

How much does it cost?

When I was studying, we never spoke about how much building cost. Architects are about design, not about costings. As I’ve said before, start talking to a builder early on in your project to get a good idea of what it’s going to cost you. I’ve heard more than one story from renovators who told an architect that their budget was $400,000, fell in love with the plans and then took them to a builder only to be told it would cost $750,000. That’s a waste of time and money and is no fun at all.

What are some things you’ve learned over the years that have really stuck with you? Is your home oriented to the north? If you could put a bit of magic in your house, what would it be?