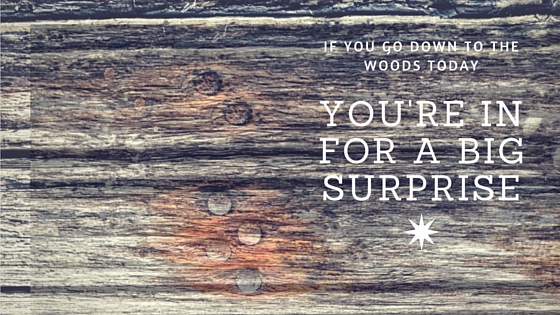 If you go down to the woods today…

JD recently received an email from a customer who was not happy that there had been a “massive cost blowout” on their project.  While the cost of the project was now larger than originally anticipated, this was because there had actually been a “massive scope of works blowout”.  That is, as the job had gone one, they’d asked for more work to be done.

Customers often ask for a fixed price quote, and that’s understandable as people like to know how much their job is going to cost. However, unless they’ve got a comprehensive scope of works, it’s really easier to keep pointing at things around the house and say, “can we just do that? And that. And that.” Before you know it, you’ve gone from a new set of bifolds in the living room to a revamped kitchen and pergola as well. And the costs go up accordingly. (Remember when we talked about the fact that “just” is a very nasty little four letter word that you really shouldn’t use on a building site?)

In addition, while builders can make a reasonable assumption about what to expect when they start working on a house, there are often a fair few surprises lurking beneath the walls and floors.

In older houses particularly, it’s hard to tell what state the wiring is in until you actually start pulling things apart. If you lucky, the house was rewired in the not-too-distant past. If you’re not, the whole house may need to be rewired. Safety wins every time.

A builder can make a guess as whether asbestos has been used in a house by the age of the building (asbestos has not been used in building since the 1980s, so if your house was built prior to that, there may be asbestos) but again, they won’t know for sure until demolition begins. Asbestos removal needs to be undertaken by a professional – this is not a weekend DIY project – and costs will vary depending on how much there is.

Gyprock and paint can cover a multitude of sins when it comes to rotten or termite-riddled timbers (remember the termite buffet?), so if damaged timbers are uncovered during the building process they’ll need to be replaced – there’s no fudging this one.

Everything might look fine from the outside but even if you’ve had a building inspection there could be problems that don’t turn up until you really start investigating. A friend of ours had to entirely reclad their house as incorrectly installed cladding started literally peeling off the walls 18 months after they bought it. The problem really showed up when JD and his crew were there working on a new deck and staircase. Once the problem had been identified they had no choice but to fix it. You never know the quality of workmanship undertaken by a previous builder unfortunately.

If you’re renovating, it’s wise to allow around 20 percent of your budget to allow for contingencies such as these. Best laid plans can come unstuck quickly when hidden problems rear their head. And make sure you use that budget buffer for unavoidable problems, not paying for things that you “just” decided had to be done as you were going alone. Prepare a thorough scope of works before you start so that any budget blowouts really are unexpected ones.

Have you had a “scope of works blowout”? Do you live in an old house that might be hiding some problems? What do you wish you could just do at your place?

Teaming up with Essentially Jess for IBOT