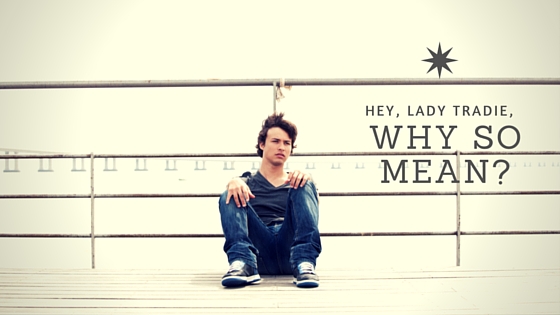 Hey, lady tradie, why so mean?

Driving around town last week (we may even have been on our way to the tip for a little pre-Valentines Day romance!) I noticed a twin cab ute that belonged to a lady tradie. It was all painted up with her signage and her tagline was “No bumcrack. No BO. No BS.”

At first I was all “yeah, right on, sing it sistah!” and then I thought about it a bit more. Women in trades are few and far between and have they have to work extra hard to make it through their time and get respect. Is the best way to celebrate this really by indulging in reverse sexism?

Imagine if that was a male tradie’s truck and his tagline was something along the lines of “No blonde moments. No hair tossing. No earrings dropped in your plumbing.” People would be outraged and I’m sure he’d earn himself plenty of mortal enemies and angry column inches in newspapers and on Facebook.

So why is it OK for a woman to do it?

Surely there’s a way for women to succeed in trades without taking potshots at men. I’m a big believer in the fact that you don’t need to put other people down in order to raise yourself up. I’m sure this woman is a good tradie and I just wish she’d focussed on blowing her own trumpet rather than pointing out other people’s perceived faults. And I’m sure that tagline is not winning her any friends in the local tradie community – JD certainly wasn’t thrilled about it. Building and construction is very much about relationships and word of mouth referrals between trades and contractors and, while that tagline might appeal to female customers (of which there are plenty), I’m not sure it’s winning friends elsewhere.

I don’t usually get involved in gender politics but I just had to comment on this one.

What do you think about this lady tradie’s tagline? Is it reverse sexism? If you have/had a trade, what would your tagline be? (Ours is “ We love small building jobs!”)