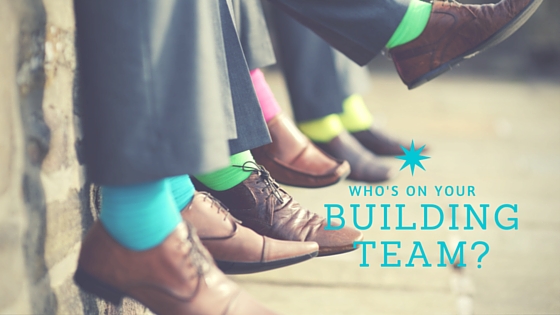 Say what? A guy with a theodolite? Yep, that’s right, pretty much the first person you’re going to need to talk to is a surveyor who will do a current survey of your property so that the architect or building designer knows what they’ve got to work with and can get levels right from the start. A survey will cost around $2000 in Sydney.

Admit it, before you called the surveyor you probably spoke to an architect about what you wanted in your space. That’s fine – after all, that’s the fun bit. The architect or designer will take a brief from you about what you want to achieve with your space and your budget and they should come back to you with design solutions. Be aware that architects, in general, are not great at building costs. So before you fall in love with their design and head into the DA process make sure you speak to a…

Builders are problem solvers and they’ve got a really good handle on how much things cost. Really cost. So, while you’re still at concept stage with your design professional, start talking to your builder about costs and whether what you want is possible with the money you’re willing to spend. The builder and you are co-captains of this renovation team so you need to make sure you select someone you can communicate well with, and also someone who’s ready and able to make the tough calls when necessary.

The structural engineer won’t be on the field for the entire game, but they’re essential for the pre-game warm-up. They work with the designer and builder to ensure that the design is structurally sound. You can approach a structural engineer independently but your designer or builder will also be able to recommend an engineer they work with. If an engineer tells you they don’t need to visit the site, don’t believe them. A good engineer will come out and see the site in person.

These guys are the engine room of the team, they’re the ones doing the hard yards to erect framing, working with sub-contractors and generally making sure that the job keeps moving. Most carpenters can turn their hand to other trades, but they can’t do plumbing or electrical work. Safety, yo!

While the carpenters do much of the work in a building project they will be working with a number of different sub-contractors including electricians, plumbers, tilers, waterproofers, bricklayers, concreters, roofers to name just a few. Most builders have sub-contractors that they trust and have worked with over the years. If your mate’s an electrician, that’s great. However, if you pressure the builder to use him, don’t expect the builder to be responsible for his work, as he will for his own sub-contractors.

Building projects can be a stressful business – it always gets worse before it gets better and you’ll be well sick of Thai takeaway by the time it’s over. So make sure you’ve got a friend standing by with a glass of something cold and a sympathetic shoulder. Even if you have the smoothest of renovations, you’ll probably need her at some point.

Who is on your renovation team? Are you a good team player? AFL, league, union or soccer?