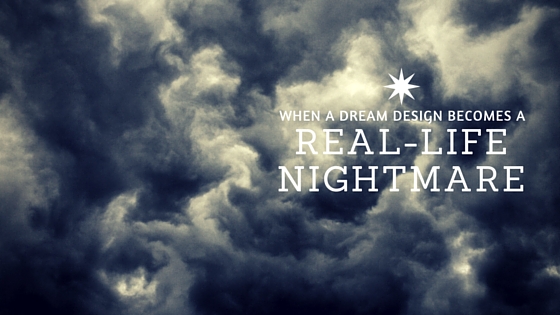 When a dream design becomes a real-life nightmare

Let me tell you a story. It’s a cautionary tale and one you should pay attention to if you’re thinking about a renovation. Especially a big renovation.

Once upon a time, we were watching Grand Designs (well, just the other night) when we suddenly realised the featured house was currently for sale, in fact, my sister had pointed it out to me a couple of months ago. You see, in addition to cooking, sewing and reading my other hobby is looking at real estate – usually in Hobart, where we have vague dreams of retiring one day. One of my sisters lives down there and she occasionally flicks me houses I might be interested in. This one was listed at $5million plus, putting it not only in “total fantasy” territory for us but also at the top of the range for Tasmanian real estate in general.

The house in question is in Battery Point, a lovely historic district of Hobart, right on the waterfront and it incorporates a brutally modern extension with an original timber cottage. On Grand Designs the owner admitted that the original budget of $1.6m had been left in the dust and that the total project cost was far greater than that and that he’d probably be paying for it for the next ten years. Gulp.

The next day, I saw this feature in the newspaper and my heart broke. It turns out that this renovation cost so much that the owners can no longer afford to live there. They’ve had it on the market for more than two years and are renting out the front bedroom for $350 a night as luxury accommodation. It’s an absolutely stunning house, no question, but for me, it seems that the price was too high – both financially and emotionally. As the Grand Designs episode wrap-up says, there were council restrictions and challenging building conditions. “Add to that an architect given free reign, contracts done on a handshake, and Greg’s insistence on quality, and you have a schedule blow-out with a budget spinning out of control.”

Unfortunately, it’s a situation that’s far too common. A home-owner falls in love with an architectural design and plunges in without a real understanding of the costs involved. Because they love the design so much, they’ll often go with the builder who gives them the cheapest quote without questioning why it’s so much lower than the others. They begin building and by the time it’s finished they’ve paid anywhere between 50% and 100% more than the original estimate. #realtalk

Best case scenario is that they get a trustworthy, knowledgeable builder, like JD, involved at an early enough stage that they can make design changes to accommodate their budget. He’s great at working with customers to make sure that their design wants and needs are aligned with their budget. A good builder will help you find solutions to design and budget issues. After all it’s much easier to make new lines on paper than it is to move built walls or get more money from the bank. In some cases we’ve seen people go all the way down the design and approval track (without consulting a builder along the way) and only then realise that they can’t afford it and so they decide to sell the house instead – having spent $30,000 – $40,000 along the way. Which is great for the designer and the real estate agent, but not so great for the home-owner.

There’s no denying that this Battery Point house is architecturally impressive and I’m sure it’s been well built but it’s just so sad that this couple’s retirement dream is now having to take a new direction due to the cost and scope of the project they decided to embark on.

Have you embarked on a renovation project and then put the brakes on? What advice would you offer to this couple? Where would you like to retire to?

Linking up with Essentially Jess for IBOT