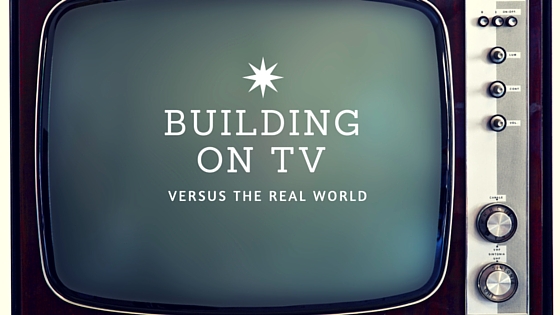 Renovations and building projects do not happen in three days. They are a triumph of scheduling and logistics and in the real world, that often means delays as tradesmen take longer than expected, or get caught up on someone else’s job or are waiting for supplies.

Renovations do not cost what they tell you on TV. The project costs quoted on most television shows only include materials, not labour. JD had up to 20 tradies on site at an average of $80 per hour for up to 12 hours a day. That’s almost $20,000 a day just in labour.

In the real world, you demolish something and it stays demolished. In TV land, JD once had to re-install a window just so that they could take it out again with the cameras rolling. Efficient.

TV renovating shows care more about their ratings than they do about your renovation. JD worked with one couple for weeks on their renovation before filming started – plans, materials and fixtures. Then the show got cancelled and so did their renovation – leaving them with a half-packed up house and a tired kitchen. He was heartbroken and I suspect they felt the same.

So, when you’re planning your renovation, make sure you’re basing your costs and timings around the real world, not reality TV world.

What’s your favourite renovating show? If JD turned up at your place with 20 tradies and a camera crew, what would you like him to change at your place?