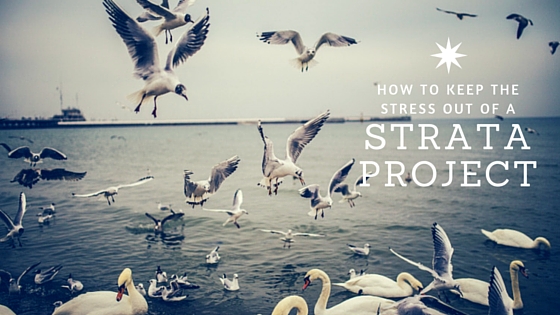 How to take the stress out of a strata project

When I lived in an apartment building, I like to think that I was pretty much the ideal owner (why not give myself some snaps!) – I paid my strata fees on time, parked where I was supposed to, didn’t play loud music and generally kept to myself. When the time came to revamp our lobby, I looked at the plans, thanked the people involved for putting in the effort, pointed to the one I liked and pretty much left them to it. Getting highly involved in strata building work is not how I roll.

However, not everyone’s like me (thank goodness, on many levels) and some people seem to really love getting involved when there’s building work happening at their apartment block. Even if they haven’t been involved in the planning or costing at any time previously or have any knowledge of what’s going on or how to build things. Ahem.

JD and the crew recently worked on a large deck for a small block of four apartments. It was a reasonably large project as the block was on a sloping site and was two storeys tall – they were constructing balconies for each of the apartments that were joined by a central stairwell that went all the way down to the backyard (almost three storeys below). The project was a long time in the planning and when it finally began, everyone breathed a sigh of relief – it was underway! Soon everyone would be enjoy a bubbly drink on their balcony as the sun went down! Bring on the pot plants and the fairy lights!

As so often happens in building work, the balconies took longer than expected and everyone had an opinion on how the job should be done. One of the keys to having a building job go smoothly is most definitely keeping the lines of communication open, however, in strata work, if every resident wants to have their own line of communication (and this was only a four-unit block), things can get messy quickly. The guys found that they were often waylaid by an owner or two who wanted to talk about the job and what they would like to be done differently. Not only does this take up time (an hour of talking is an hour where no building work is being done) but on a fixed price job like this, with multiple stakeholders, plans were not going to change mid-stride.

Another unexpected surprise (and there’s always at least one), was that the building code changed while the balcony was being built (and was in fact almost complete). This required some extra work to be done and one of the owners requested that we do it for free, as it was, apparently, not a large job. This work was not something that the team had done incorrectly or could have foreseen and while it’s irritating for owners to have pay for something extra at the end of the job, it’s not reasonable to expect the builder to do it for free. We always endeavour to treat our customers with respect and ask they they treat us in the same way.

Working with a body corporate or strata committee doesn’t need to be stressful if you remember the following things.

Have you been a part of a strata committee building project? Did it run smoothly? What will you be drinking on your balcony come sunset?