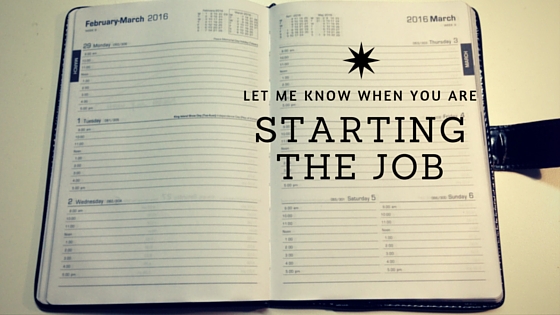 That first part is easy – they’re builders not the fire brigade. He doesn’t have a team of carpenters sitting around at the 5to50 office just waiting for the red light to start flashing so that they can strap on their nailbags, slip into their workboots, jump into their utes and race off to start a bathroom renovation – although that would be kind of cool to see (and one of the guys did just join the fire brigade!).

But the question of why he can’t provide an exact start date is often a little harder for customers to comprehend – after all, we are used to making an appointment for other services, why not this one? Well, you know how sometimes you get to the hairdresser for your 4pm appointment but they don’t actually get started on you until 4.30pm because someone’s foils took longer than they thought it would. Times that by… a lot, to get an idea of what’s going on with building.

Building is all about scheduling – often of multiple trades (remember, a bathroom renovation can involve up to 10 different trades) – and that’s a balancing act that can go off the rails very easily. Here’s how:

Because 5to50 focusses on small building jobs, there generally isn’t too much waiting around for council approvals. However, sometimes there are delays with essential services such as water and electricity – especially when those services need to be moved or re-routed. We recently had a job that needed the water company to get involved up front – that was slow and time-consuming and frustrating but unfortunately there’s nothing the builder can do to speed things up once all the paperwork has been submitted (usually by the architect).

If a job involves outdoor work, a day of rain can shut the site down. Not so much because the guys don’t want to get wet, but more because water and powertools (for example) are not a good combination. Or perhaps they’re working on a roofing project – the last thing you want is to take a carefully tied tarp off and expose the inside of the house to the weather. And, in Sydney anyway, rain can quite often go on for days, which means that job gets delayed for days which affects the start date of your job.

So, it’s stopped raining and the guys are back to work on the job before yours, but now they need to get other trades involved. Those trades also got delayed by the rain (you can’t pour concrete in the rain) so, they’re now trying to catch up too and that original job just got delayed a bit more.

There are some building materials that you can buy off the shelf and use the same day but there are others that need to be ordered – custom made windows for example or joinery for a kitchen. Those things generally take six weeks, but sometimes they take a bit longer, which means another delay to that job, which affects the start date of your job.

Building doesn’t always go exactly to plan – sometimes issues turn up unexpectedly and need to be dealt with. These include things like discovering that framing is rotten and needs to be replaced or wiring that’s not up to code – fixing these things adds to the time that job takes and again, there’s a knock-on effect to your start date.

Put simply, building is not an exact science. Builders will try to give their best estimate of an accurate starting date but there are some things that are out of their control. I know that’s #frustrating, but that’s just the way it is, unfortunately #realtalk.

Do your projects sometimes run over time? What delays happened in your building project?
Are you a talker or a non-talker at the hairdresser?